skip to main | skip to sidebar

I want to start with how God worked some wonderful miracles with the timing of Lydia’s birth.  I was really stressed wondering who I could find to watch the other girls while Jake and I go have Lydia at the birthing center.  I had made a schedule of when some friends and family could babysit, but because of work conflicts and vacation times, etc…. there were some days and nights that nobody would be available.  We were also about to move to a new house.  We were supposed to close on both houses on Friday, Feb 24 and move through the weekend 25-26.  Due to some paperwork issues the closing was pushed to Wednesday; Feb. 29 and the moving the following weekend, (March 3-4).  God knew that we would be busy with other things that weekend.

Friday; Feb. 24, 2012 at about 4pm I started having contractions at about 1-2 every hour. I told Jake “I don’t think I’ll make it through the weekend.”  I went to bed about 9pm, thinking I’m going to need my sleep. I woke up with contractions at about 3am. Jake woke up soon after and started timing them for me. They were about 10 mins apart.  We waited until about 5am, when the contractions were about 6mins apart, to call the midwife (Dinah) and let her know that it looked like today was going to be the day.  At 8am we called my parents (my mom happened to have that weekend off!) and let them know we would bring the kids over that morning.  After breakfast and getting the kids ready, we headed over to my parents at about 9:00am.  The contractions were still about 5-7 minutes apart, but were becoming very regular in intensity.  We arrived at my parents at about 9:45am, Dinah called and asked how we were doing.  We updated her and she reminded us not to wait too late.  At about 1030am I started feeling nauseated and shaky. We called Dinah and she stated she would meet us at the birthing center at 11am.  We went to the center and walked around the park outside until Dinah showed up.  When she checked me, I was 5 1/2 centimeters dilated and 80% effaced. The second midwife (had just finished school and getting hours,) Christine arrived about this time.  We (Jake, me, and Dinah) decided to walk around the park some more and then went inside where I took the best and longest shower of my life.  I really LOVED that hot shower.  After about an hour in the shower, the baby had really moved down, but I felt she was still very posterior and needed to move forward.  Dinah checked me again and I was 100% effaced and about 8 centimeters dilated.  We tried at this point some different positions to get the baby to move forward (out of my rectum.)  First I went for a few contractions with my head down, knees tucked and butt in the air.  Dinah fed me some cheese and crackers and oranges.  Baby still posterior.  Then we tried lying on right side with left leg to chest. Still posterior.  Then lying on left side with right leg to chest.  THAT finally got baby moving forward.  With the contractions starting to pick up, Dinah started the water in the spa tub.  Dinah kept feeding me, but I was feeling kinda nauseated so I didn’t eat much.  I got in the tub (*sigh of contentment*) and about 1 hour later (contractions still 5-6mins apart) time to push. One push, head out, I looked down and saw wonderful head with soft hair.  Next push rest of baby out. It’s a GIRL!  Lydia Hope Wells was born at 3:12pm on Feb. 25, 2012, a perfect water birth (and still a VBAC!)  When Jake cut the umbilical cord we realized the cord is very short!  We had to lower Lydia to get enough length to cut.  After the placenta came, we realized why.  The cord had attached to the edge of the placenta and wrapped around the edge. Normally the cord attaches to the center and branches out.  The midwife and Christine had never seen anything like it before; they were so amazed they took pictures to share with their midwife group.  We ate dinner (chicken salad sandwich from Jason’s Deli) while Lydia was weighed, 8.0 lbs and 20.5 inches.  I didn’t need any stitches, so after eating we left at about 5:30pm.  Lydia’s sisters were so excited to see her!!!!  They gave lots of hugs and kisses and wrapped her up in blankets.

Lydia latched on for nursing right after birth and has been such a wonderful nurser ever since.  She loves to just nurse for hours.  She has a soft cry until she decides she’s done waiting on me; then she can really wail!  She wiggles and squeaks a lot unless I’m talking to her; then she is very still listening and watching me.  She is so sweet and petite, what a wonderful gift from God! 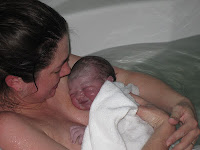 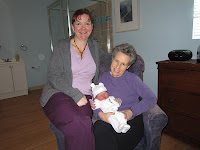 Yes, she was still a little blue from birth in the upper photo. But she got pink real quick!
The second photo: Dinah on right, and Christine on left. 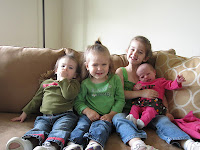